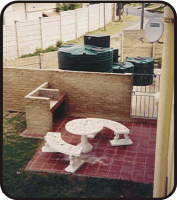 Raw sewage contains a variety of materials which are dissolved, diluted and suspended, which the household added to fresh water. Most of the suspended matter is "screened" out in the predigstion (PD) chambers.  These chambers, similar to septic tanks, provide a vital service to the Scarab system,

The PD should be sized - i.e sufficient volume - to allow for all the above processes to occur.  We are not sure what the requirements for every individual project, as none are the same, however, through experience and research, we know that there should be at least three chambers, and that each chamber should be equal to the expected peak daily flows.

If these PD chambers are to be installed underground, it is highly recommended that the plastic "septic" tanks be avoided . . .

Not only are they notorious for collapsing, imploding, splitting underground, but they are only single chamber, and therefore are not even compliant in the SABS National Building Regulations (NBR).

Want real peace of mind? - Get the builder to build one from concrete and bricks.

We calculate peak flows using the SABS National Building Regulations (NBR) guideline.  While these are only guidelines, we have found them to be accurate enough when specifying and designing systems.

As and example, if a three bed-roomed house (or 6 people) required a septic tank / Scarab system, we would recommend each chamber would need to have an effective capacity of 950 litres, and there must be at least 3 chambers.

The Scarab™ biological system, (called a biotower or bioreactor), converts the biological process from anaerobic (without Oxygen ) to aerobic (with Oxygen) and this is where the treatment speeds up. Oxygen is injected into the water, and vast colonies of bacteria - we call them "bugs" - grow on the BioPac™ media, which consume the "food" in the water.  The balance of bugs v food is most important, as if you have too much food, the bugs can't eat it all, become fat and lazy, slouch around all day, and become useless - somewhat like our politicians.  On the other hand, if there is not enough food in the water, bacteria just wont grow, and the system wont function correctly. 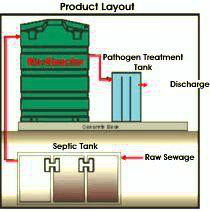 Once water has been through the biotower, there should be be nothing left except bacteria and this is where we need to disinfect. We need to kill all bugs, which may also include some of the really bad villains like cholera, typhoid, politicians etc.  We do this either with simple chlorine tablets, or with Ozone.

Ozone is an incredibly strong oxidant, and a super killer of bacteria. It is also the most environmentally friendly method of disinfection.  Scarab™ was the first sewage treatment plant supplier to include Ozone disinfection on all systems